Why are the opinion polls for the next UK general election showing wildly different results?

With a general election widely expected to be called within the next few weeks, there is a substantial amount of interest in election opinion polls. However, polls in recent weeks have been confusing. Depending on which pollster you choose to believe, the Conservative lead over Labour is somewhere between 1% and 4% (ComRes) or between 10% and 14% (YouGov and Opinium).

Due to the nature of the first-past-the-post system in multi-party elections, a small lead such as the one ComRes is reporting would be unlikely to give the Conservatives a majority in the House of Commons, whilst if they have a double digit lead they could be on track for a landslide victory. Clearly, all the pollsters can’t be correct here. So what’s going on?

A UK general election is fought in 650 constituencies, with the candidate with the most number of votes elected, and each constituency has its own particular quirks. Until recently, elections were on the most part a battle between Labour and the Conservatives. Pollsters could accurately forecast a national uniform swing, and therefore the probability of Labour and the Tories gaining or losing in traditional battleground seats such as Dartford and Lincoln. However, the link between national vote share and the number of seats won is now a complex and unpredictable one.

Given that the 650 separate elections to the House of Commons are fought as 650 local races, I thought it would be worth looking at how the regional subsamples from the various polls compared to the two most recent nationwide elections; the 2017 general election and the 2019 European election. Of course, the 2019 European election was an atypical election due to the strong performances by the Brexit Party, the Liberal Democrats and the Greens and the poor showing by the traditional big two.

Irritatingly, pollsters other than ComRes do not break out their results by the 11 NUTS 1 regions that comprise constituencies to the European parliament in Great Britain. To allow a comparison between results and the various pollsters, I’ve aggregated the results to the regional splits used by YouGov; London, South of England, Midlands/Wales, North of England, and Scotland.

The polls are reasonably consistent in London, where the Conservatives are only slightly down on their 2017 performance, but there has been a significant swing from Labour to the Lib Dems. The most significant difference is the fact that ComRes, which has been consistently showing the smallest Tory leads, has Labour and the Lib Dems virtually tied.

All three pollsters suggest that the Conservatives might perform more strongly in London than is widely thought. If they hold on to most of their vote whilst there is a large swing from Labour to the Liberal Democrats, then they could hold on to most of the 21 seats that won in 2017.
The following chart shows the polls in the South of England.

The polls are fairly consistent in Scotland, with the SNP having a commanding lead over the Conservatives in second place.

The North of England shows the biggest disparity between ComRes (which shows the Conservatives with the largest lead), and the other pollsters that show the Tories with a much larger lead. ComRes show Labour with a lead over the Conservatives of 12 points, whilst Opinium shows a seven point Tory lead. The question of the actual size of the Tories’ lead in the polls at present can be mainly attributed to whether ComRes are correct in their assessment of party support in the north.

As ComRes split their polling figures into more granular regions than the other pollsters, we can see how their voting intention figures compare to election results in the three NUTS 1 regions in the North of England; North West, North East, and Yorkshire and The Humber. 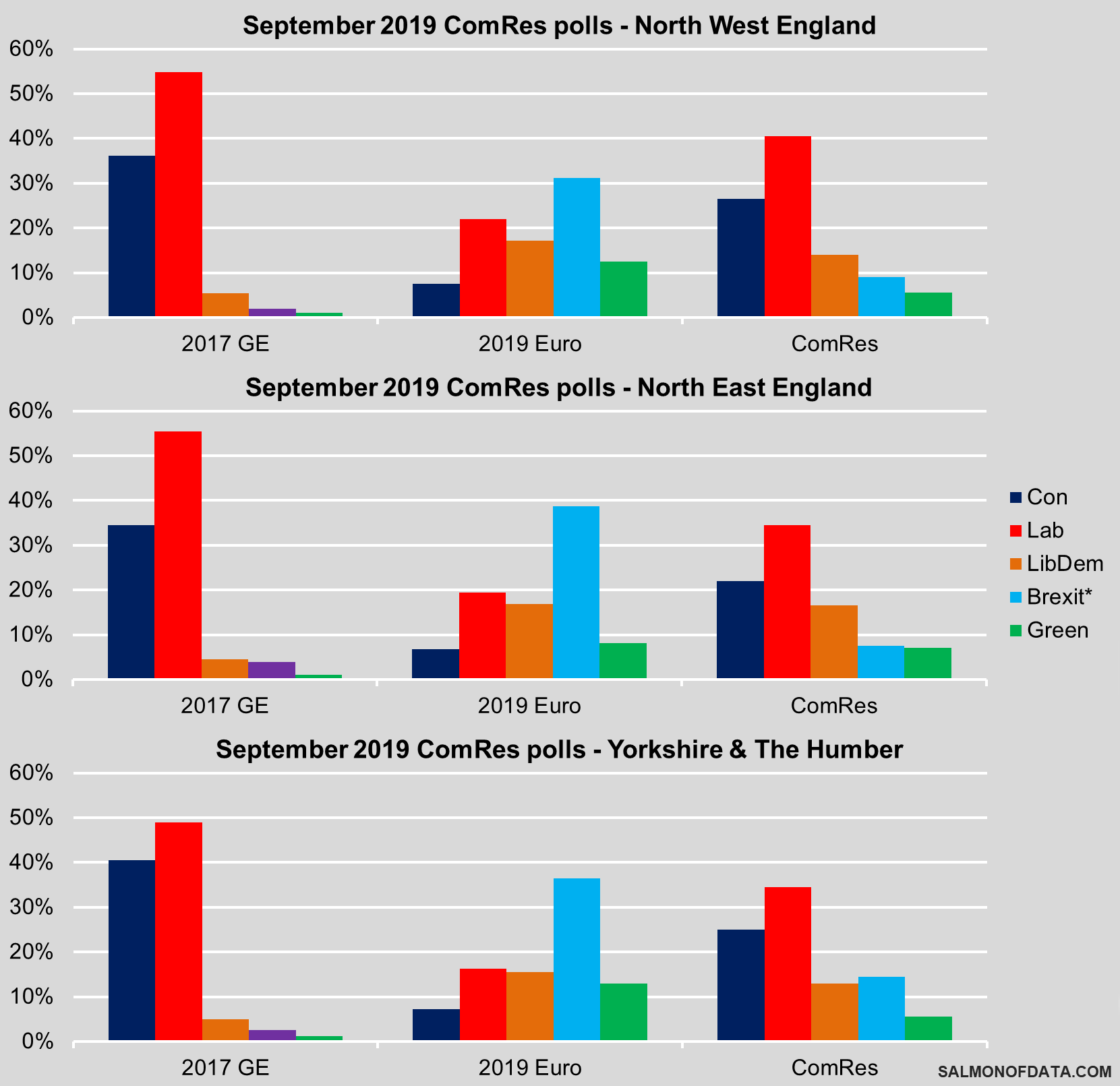 The three regions in the North all show a similar story in the ComRes polls, with Labour in the lead and the Conservatives in second place.

Without any constituency polling, it is difficult to determine who is correct before the election takes place. However, the fact that seats in the North East are traditionally the soonest to declare means that it should become apparent pretty early on election night if the Conservatives are on course to start knocking down chunks of Labour’s “red wall” in the Brexit supporting North (if polls stay the way they are now).

If ComRes are correct that the Conservatives hold a narrow nationwide lead over Labour, then Houghton and Sunderland South will be a safe Labour hold. If Labour hold by fewer than 5,000 votes, then the Tories could be on course to make the gains that they need in the North to regain their lost majority.